Tulsidas says, “O Son of wind god, remover of difficulties, oh one of auspicious form. With Ram, LAXMAN and Sita  reside in our hearts of King of Gods“. Here I put emphasis on LAXMAN, Tulsidas asks Ram, Laxman and Sita to reside in our heart forever. If you don’t see Laxman Ji’s idol in swaminarayan temple, then how can you think about going to swamianrayan temple. Read my article, why swaminarayan is not god? You can also see from below image that BAPS swaminarayan has no idol for Laxman Ji, and they used the word ‘Dev’ for Shri Ram. 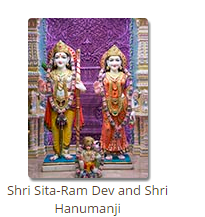 I’m more concerned about young generation. If swaminarayan sampraday, no matter which sampraday, is on the path to change ages old of tradition of saying ‘Ram Laxman Janki Jai bolo Hanuman ki’, then that should concern each and every Ram or Hanuman Bhakt. You can help by spreading this message to anyone you might know, and you should tell them no not visit any swaminarayan temple.

37 thoughts on “Why true Ram Bhakt should never visit any swaminarayan temple?”